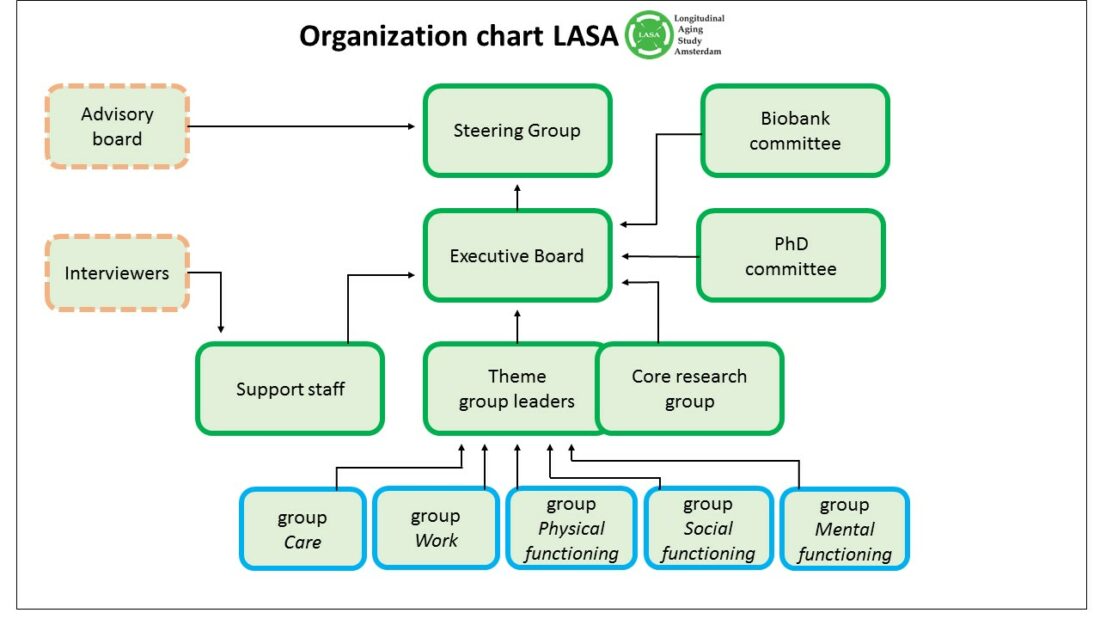 The Executive Board consists of the scientific director of LASA and the project manager. They supervise the scientific progress, the data collection and data processing and storage.

The Steering Group advises the Executive Board on the content and strategy of the LASA study, and supports decision making. The Steering Group consists of representatives from the various research departments that participate in LASA.

LASA has a project manager, two data managers an office manager, a website manager and one or more fieldwork coordinator(s). Together, they keep the LASA study going.

This committee consists of researchers and project managers. The Biobank committee regularly meets to discuss privacy regulations, and handles requests for the use of LASA Biobank material.

This committee consist of two PhD students. About seven times a year they organize  a meeting for all PhD students working with LASA data. During these meetings PhD students present their research and discuss practical issues.

This group mainly consists of senior researchers, who meet about four times a year. The Core research group discusses the research progress and opportunities for new interdisciplinary collaborations.

Since the LASA study is focused on various functional domains and many research topics, researchers are organized in five thematic groups. Each group has a group leader, and the groups meet several times a year.

Once in every 3-4 years, LASA invites a group of international scientists for an Advisory Board meeting, to evaluate the LASA study and to formulate goals on research strategy and content for the future.

During the years when data collection is taking place, LASA employs a group of about 30 interviewers who are conducting interviews in the homes of LASA participants.