LASA filenames:
LASAXXXX (to be determined)

Background
Older adults are particularly prone to the development of undernutrition, which affects about 10% of community-dwelling older adults (1), and is associated with several adverse health outcomes (2). The most important risk factor for the development of undernutrition in older adults is the age-related decline in appetite, known as Anorexia of Aging (3). Several physiological and non-physiological changes that occur at old age contribute to Anorexia of Aging. These include poor oral health, poor taste and poor smell function (4). Recently, the aged oral and gut microbiota have been implicated in the development of poor appetite and undernutrition as well. Associations of the oral microbiota with oral health and poor taste have been reported (5, 6), as well as associations of the gut microbiota with poor appetite and frailty (7, 8). However, neither the oral nor the gut microbiota have been studied in relation to undernutrition in older adults.

The MicMAC-study was designed to study the associations of the oral and gut microbiota with poor taste, poor smell, poor appetite, and undernutrition in Dutch community-dwelling older adults.

Study design
The MicMAC study is a cross-sectional side study within LASA. All MicMAC data was collected during a single home visit, taking place between 2017 and 2018 (between the LASA I- and J-waves). There were 2 types of visits: a general visit and an extensive visit. The extensive visits were similar to the general visits, but also included a 3-hour fasted salivary and blood sample, and a more extensive smell test. Whether a participant would partake in the general or extensive visit was decided prior to the visit based on the participant’s preference and the researcher available (not all MicMAC researchers were equipped to conduct the extensive visits). Informed consent was signed by all participants prior to the visits. The MicMAC study was approved by the medical ethics committee of the Amsterdam UMC, location VUmc (NL60911.029.17 / WC2017-008).

Participants
All LASA participants who had participated in the I-wave medical interview were pre-screened for eligibility based on their existent LASA data (n=1642). Participants were considered eligible if they met the following criteria: age ≥ 65 years old (as of June 1st, 2017), valid body weight measurement during I-wave, valid body weight measurement during either H-wave or 3B-wave, ≤2% body weight loss averaged over the three years prior to the I-wave, BMI < 30 kg/m2 during the I-wave, mini-mental state examination (MMSE) score ≥ 18 during I-wave, and living independently during the I-wave. If participants were considered eligible based available LASA data (n=727), they were contacted by phone and screened based on the remaining exclusion criteria: active malignancy (with the exception of basal cell carcinoma), inflammatory bowel disease, immune suppression (either by the use of medication or disease), use of systemic antibiotics in the previous 3 months, or admittance to hospital or long-term care facility in the previous 3 months. Figure 1 depicts a flowchart of the 359 included MicMAC-participants (9). 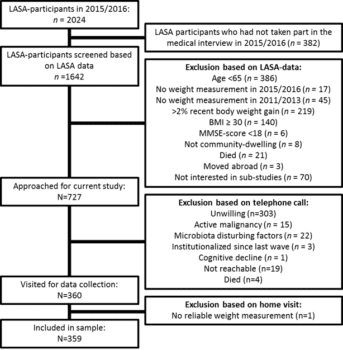 Figure 1. Flowchart for inclusion of the 359 LASA participants in the MicMAC side study (9).

Telephone screening
During the phone call, participants were asked for their medical history and medication use, since this could have changed since the I-wave. The medical history was recorded as string variables, categorized as either lung disease, heart disease, vascular disease, diabetes, intestinal disease, rheumatic disease, malignant disease, and other. For medication, the name, dose, frequency of intake, and duration of use was recorded.

Body weight
Body weight was measured according to the LASA standard operating procedures using a calibrated bathroom scale (Seca, model 100, Lameris, Utrecht, The Netherlands). Participants wore either only undergarments, or indoors clothing without shoes. In the latter case, a kilogram was subtracted from the measured body weight. BMI was calculated using the first available LASA height measurement from previous LASA waves. Recent body weight change was averaged over the previous 2 years in % body weight, using the difference between the current assessment and the I-wave weight measurement.

Body composition
Body composition was estimated with body impedance analysis using a Bodystat 1500MDD device (Bodystat Ltd., Isle of Man, UK) according to the manufacturer’s directions. Participants lied down on a flat surface for 5 minutes, arms and legs not touching. The back of the left hand and left foot was disinfected and electrodes were applied. Measured resistance and reactance at 50 kHz were used to calculate appendicular skeletal muscle mass index (12) and fat free mass index (13).

Taste tests
Taste function was assessed using taste strips (Burghart Messtechnik GmbH, Wedel, Germany). This taste test commonly consists of 18 paper taste strips, of which 2 are tasteless and 16 are impregnated with 4 increasing concentrations of sweet, sour, salty, and bitter tastes (14). Upon our special request, 4 umami taste strips were specially added by Burghart to their standard test, reproducing the taste strip test validated by Mueller, et al (15). The same test design, tastant concentrations, and sequence in which taste strips were presented was used. Participants received 1 point for each correctly identified taste, with each individual taste score ranging from 0 (none of the taste strips correctly identified) to 4 (all of the taste strips correctly identified), and the total score ranging from 0-20. A total taste score <6, sweet score <2, sour score <2, salty score <2, bitter score <1, or umami score <1 were considered poor taste, thus indicating hypogeusia. Participants were asked not to smoke, chew gum, eat, or drink anything other than water in the hour preceding the taste test.

Smell tests
Smell function was measured with Sniffin’ Sticks (Burghart Messtechnik GmbH, Wedel, Germany). The smell test consists of three parts: an odor identification test (score 0-16), an odor discrimination test (score 0-16), and an odor threshold test (score 0-16). The scores can be summed to form the Threshold-Discrimination-Identification (TDI-) score (16). Each odorant was presented to participants in a felt-tip pen. The test and order in which odors were presented were done according to the manufacturer’s directions (16). An identification score ≤9, discrimination score ≤7, threshold score ≤2.5, or TDI-score ≤ 19.5 were considered poor smell, indicating hyposmia (16). Only the smell identification test was performed in all visits and therefore used as our overall measurement for olfactory function, which is common practice (17-22). The additional odor discrimination and threshold tests were only performed in the extensive visits as they can be considered too time consuming and too burdensome for some older adults.

Blood sampling
Venepuncture was performed during the home visit after a 3-hour fast. Vials were immediately centrifuged at 1800 g at room temperature, after which plasma and serum was aliquoted and transferred to the research facility in a cool pack where it was stored at -80 °C. A vial of EDTA blood was not centrifuged, but transferred to the research facility for immediate HbA1c and blood count determination. Venepuncture was only performed in the extensive visits as some participants thought it too burdensome and not all researchers conducting the home visits were certified to perform venepuncture.

Fecal sampling
Participants collected 2 samples in sterile containers (Sarstedt) within 24 hours of the visit. One sample was kept at room temperature, aliquoted in portions of 100-150 mg (for 16S rRNA sequencing) and stored in a -80 °C freezer within 36 hours of production. The other sample (for short-chain fatty acids determination (SCFA)) was kept in the participant’s refrigerator, transported to the research facility in a cool pack, homogenized, aliquoted in portions of 200-300 mg, and stored at -80 °C. Exact weights of the aliquots, as well as times and dates of collection and storage at -80 °C were noted.

Short Chain Fatty Acids
Fecal SCFA levels were measured at the Amsterdam UMC, location AMC, using high-performance liquid chromatography (HPLC) with UV detection according to the method of De Baere et al (23). In addition, the raw SCFA HPLC measurements were corrected for the difference in the wet and dry weight for each sample.

Oral sampling
Participants were asked to stay fasted and not smoke or chew gum in the hour prior to tongue sampling, nor did they brush their teeth that day. Tongue swabs were collected in duplicate by stroking a Copan eNAT swab (Copan Italia S.p.A., Bréscia, Italy) over the posterior tongue dorsum for four times. The swab was then inserted in a tube containing the eNAT RNA/DNA stabilizing and preservation medium. Unstimulated, 3-hour fasted saliva was collected according to the method of Navazesh (19) from participants who took part in the extensive visits. Samples were chilled in an icepack until storage at -80 °C on the same day.

Whereas all MicMAC data is managed by LASA, the 16S data on the tongue microbiota has been uploaded to the online data repository: the European Genome-Phenome Archive (EGA; EGA dataset ID to be determined). To gain access to the tongue microbiota data, a data request must be submitted to the LASA steering group with the analysis proposal form according to normal LASA procedures. If the LASA steering group decides to grant access to the requested data, the researcher will be allowed to download the 16S data from EGA.

Previous use in LASA
Up to date, one article has been published with MicMAC data (9). This article is on the associations of taste and smell function (both measured and self-reported from the questionnaire) with food intake, dietary quality, appetite, and undernutrition.