Background
Osteoporosis has become a major public health issue, because world-wide the number of fractures is increasing due to the increasing number of older people.1 In 1990, about 1.66 million hip fractures occurred, of which 1,197,000 in women and 463,000 in men.1 It has been estimated that this number will more than double by the year 2050.1 In the Netherlands, the number of hip fractures increased from 4,500 in 1972 to 16,000 patients annually in 1998, and this number is expected to rise to 20,000 by the year of 2010.2,3 Fractures, particularly hip fractures, often result in decreased physical functioning, and permanent institutional care. Important consequences are an impaired quality of life, impaired survival and increasing costs of health care.4-6 Several prospective cohort studies have been identified risk factors for fractures.7,8 Important risk factors for fractures appear to be low bone mineral density, a previous fracture, low body weight, visual impairment, and the use of benzodiazepines. 7,8

Ascertainment of fractures
Fractures that occurred between the first examination in 1992/1993 and the second LASA examination in 1995/1996, were retrospectively assessed in 1995/1996. Data on fractures that occurred between the second and the third examination in 1998/1999 were prospectively collected with a calendar. Respondents were asked to record fractures and to mail the calendar to the institute every three months during three years. They were contacted by telephone if they were not able to complete the ‘calendar’, if no calendar was returned even after a reminder, or if the calendar was completed incorrectly. Proxies were contacted if participants were not able to respond. In addition, the presence of self-reported fractures was ascertained retrospectively in the frail study, and from the third cycle and onwards during the medical interview and the telephone interview. Furthermore, an extra one year fracture follow-up was performed in a subsample (n=439) from 1999/2000 to 2000/2001 (see documentation “Falls: prevention of fall accidents (ancillary study)”. And the general practitioners of all persons who deceased or dropped out between the cycles were asked retrospectively about fractures.

Main files (October 2001)
From all separate files one main file was created (lasaco13). This file includes all fractures that were reported retrospectively during LASA-C (1995/1996) and all fractures reported between LASA-C and the end of the prospective fracture follow-up (still ongoing). The file includes variables on first, second and third fracture, type, date, and cause of fracture. It is possible to select particular fractures (such as hip or wrist fractures) or to exclude fractures due to an accident. Moreover, for each fracture it is indicated whether it was reported prospectively or retrospectively. The survival time was calculated since LASA-B (time92) and since LASA-C (time95).

A file containing all fractures and survival times of “any fracture” (all fractures except for hand/finger, foot/toe, head/neck), “hip fracture”, “wrist fracture”, “osteoporotic fracture” (hip, wrist, humerus, vertebra) and “fragility fractures” (hip, wrist, humerus, pelvis) between 1992/1993 and 2001/2002 was created (lasaco13) using syntax lasaco13.sps. Traffic accidents were excluded in all fracture definitions. Information about the separate fractures can be found in lasaco11 and lasaco12 (note: most information in lasaco11 is also in lasaco12).

Definition of the outcome variable ‘fractures’
A fracture can be defined as time until the first fracture from LASA-B (1992/1993) or from LASA-C (1995/1996). Censored data were date of death, refusal, ineligible, and the end date of the prospective follow-up. 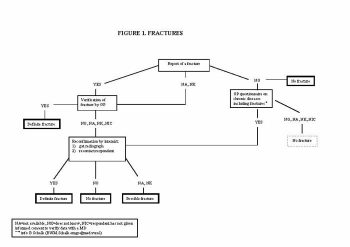