Background
Dual-energy X-ray absorptiometry (DXA) is a radiographic method to assess body composition. The method provides information on bone quality and body composition for the total body as well as specific body regions. The physical concepts of the DXA method are described elsewhere (Pietrobelli 1996).

In a subgroup of the LASA cohort, three DXA scans were obtained at the C-examination and the D-examination: a hip scan, a scan of the lumbar spine, and a whole body scan. The type of scan, regions and variables are listed in table 1. The regions for the total body scan and the hip scan are shown in figure 1 and 2 (pdf, see also below).

Hip scan
The bone area (AREA, cm2), the bone mineral content (BMC, grams) and the bone mineral density (BMD, grams/cm2) are provided for five hip regions (see figure 1). BMD is calculated as BMC divided by AREA. The Ward’s triangle is a small region of the femur (approximately 1 by 1 cm) which is located automatically by the DXA system at the area of minimum density in the femur.
In LASA, the hip scan was mostly made on the left site of the body (97.6% C exam and 95.8% D exam). If a hip prothesis was present, the right hip was scanned. No hip scan was made in respondents with a bilateral hip prothesis. Please note: for some respondents the right hip was scanned for unknown reasons. The variables CHIPSITE and DHIPSITE in the dataset indicate which site was scanned.

Joint protheses can influence BMC measurements. To a lesser extend they will also influence the LEAN and FAT estimates. The influence of a prothesis on total body estimates is likely to be small, but a considerable bias in ROI data may occur. The presence and location of a prothesis (knee and hip) is indicated by two separate variables in the dataset (CKNE_PRO and CHIP_PRO for C exam, DKNE_PRO and DHIP_PRO for D exam) .

For several respondents parts of the body were not completely visible in the field of scanning. The body parts most frequently affected are the left arm and the head. In addition, for some respondents the lines to separate two ROIs were placed incorrectly. For all these respondents, an indicator variable (CFLAG or DFLAG) was created. A complete list of flagged scans, the respondent number, the detected problem, and advice for data analysis is given in table 2ab (pdf, C exam) and table 3 (pdf, D exam).

Two general remarks regarding the use of data in statistical analysis are made. The amount of skeletal muscle mass, and to a lesser extent the amount of fat mass, is strongly determined by body height (longer arms and legs contain more muscle). Also, muscle mass is strongly determined by total body fat (the muscles are needed to support the extra weight). When appropriate, adjust for height and total body fat in the regression models.

Calculation of 3-year change variables
Repeated scans (C and D exam) at the hip are available for 336, spine for 343 and whole body for 334 respondents. Make sure to compare only hip scans that were made on the same side of the body. Example: the left hip was scanned at C exam. The respondent obtained a left hip prothesis during follow-up. Because of prothesis at left hip, the right hip was scanned at D exam. Thus, for this person no change in bone quality at the hip can be calculated. Make sure to compare similar whole body scans. Example: The left arm was not completely scanned during the D exam (out of scanning field). Two times the information from the right arm was used to calculate arm skeletal muscle. To calculate change in arm muscle, also use two times right arm at C exam for this person.
Examples in using change data of appendicular skeletal muscle mass within LASA can be obtained in the following papers: Visser 2003, Schaap 2006. 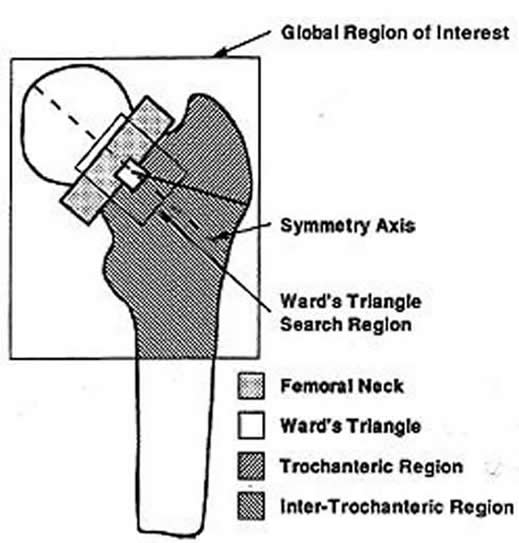